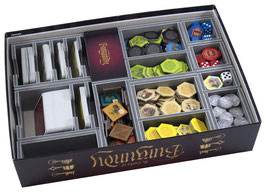 Compatible with Castles of Burgundy®, both the Anniversary Edition and original editions of the game.

Note:  Insert designed for game with external box dimensions of 31.0 x 21.9 x 6.8 cm. This is the revised design for Castles of Burgundy®, the original insert FS-CoB can be found here.

Insert compatible with Castles of Burgundy: Anniversary Edition®, and also has trays for The Card Game® version. The design provides both efficient storage and improved game play. The trays can be utilised during the game, and they greatly aid set-up and clear-away times. The rules and boards act as a lid on top of the trays.

The insert is also compatible for the original edition of Castles of Burgundy®. When used in this edition of the game the insert stores both The Card Game® and  The Dice Game® versions. More on this below.

With the top layer removed you can see the second layer of trays underneath. The trays on the left are for storing the cards from The Card Game version.

These are the trays for the player colour pieces and dice, one for each player. There is a tray for the worker chips and expansion hex tiles, and also a separate tray for the silver coins, white die, and the Inn hex tiles.

There are trays are for the buildings, livestock, monasteries, castles, mines, ships and black hex tokens. The last tray has a slot for The Shield tiles.

There is one deep tray for the trade goods tiles, which can be used as a shaker to mix them prior to being placed on the board. There is also one tray for the bonus tiles.

These are the trays for the card version of the game. The card trays have slots for each type of card from the game, and all cards can be sleeved. Note that these card trays have no bottom. The third tray is a filler tray.

The card trays can be also added when needed to the smaller game box from the card version of the game to organise them while being transported. When used in this way the fact that the cards are stored vertically lifts the lid on this box by 15 mm.

As mentioned above the trays can be used during the game to organise the components and make access by all players easy.

The trays together with the boards and rules fully fill the box, the lid closes flush, and then the box can be stored vertically. Once all the trays are in the box, one of the overview boards is placed on top of the two card trays. Then place the rule books on top of everything, followed by the three remaining overview boards. Next add the player boards, followed finally by the game board.

As noted above the insert is also compatible with Castles of Burgundy® original edition. When used like this the insert can then store both The Card Game® and The Dice Game® versions.

When packing the box you should put the dice game pad on top of the card trays and place the remaining boards and rules on top. This again fill the box so the game could be stored vertically.

FS-COBv2 is a third party, unofficial game accessory. All trademarks and copyrights remain the property of their respective owners, which are in no way associated or affiliated with Folded Space EOOD.