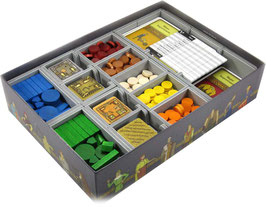 This insert is designed to be compatible with Agricola®, both the original version, and the revised 2016 version with the wooden animeeples. The design provides both efficient storage and improved game play. Many of the trays can be utilised during the game, and they greatly aid set-up and clear-away times. The boards and player boards act as a lid on top of the trays.

Please note that this insert has been designed to be compatible with the Z-Man Games version of Agricola and fits boxes sized 22.5 x 31.5 x 7 cm. Some versions of the game have slightly lower boxes and in this case the lid will not close fully flush when the box is fully loaded.

Note also that with the latest Mayfair (and sister group company) versions of the game, with jigsaw multi player board pieces and a tri-folding main game board, the lid will not close flush and will rise approximately 8 mm high when the box is packed.

Folded Space is here to bring to you board game inserts that are affordable, lightweight and add improved game play and storage to your favourite games!